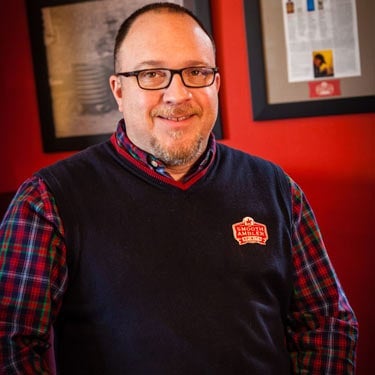 Who would you love to share a Smooth Ambler Spirit with?

I’d love to pour John Lee Hooker some Old Scout, and play “One Bourbon, One Scotch, and One Beer” with him.

Drinking good liquor might cut ten years off your life, but it’s the LAST ten. And they suck!

I actually drank Scotch before I acquired a taste for Bourbon. That’s what my Dad drank and like millions of others, that’s what I drank too…for a time.

What is one drink that everyone should try?

I love the Old Fashioned. Wherever you go, it’s both the same drink and a little different. The little nuances from bartender to bartender make it fresh and fun.

Born in Tucker, GA, raised in Waynesboro, VA and now a proud resident of Lewisburg, WV, John is a lover of music, food, film, pina coladas and getting caught in the rain. John is a talented musician with his own blues/rock band, The Jarmovers, that keeps him busy a few weekends a month. Growing up near The 20 Minute Cliff, on the Blue Ridge Parkway, has always been a fascination and a special place in John’s life. Located at the top of a deep valley, the farmers used to use it as a bit of a time signature. When they would look up, and see the sun hitting the cliff, they knew it would be about 20 minutes before it was dark down where they were.

As Director of Sales, John brings a whole lot of ‘shuck & jive’ to the operation. When his best friend of several years, John Little, asked if he wanted to join himself and TAG as they started SAS his response was easy ~ “I sure as hell do”. One of the original distillers, John quickly became the ‘words of the outfit’, writing most of the copy for bottles, point of sales materials, brochures and web.

John considers SAS to be the Farmer’s Market ‘tomato’ of booze. Starting with careful selection of the grains that we use down to the slow and patient craft of distilling our spirits. Even our ‘Merchant Bottled’ spirits are tended to, overseen and taken to market in a much smaller way than ‘big liquor’ would do it. “It’s exciting to be part of something so small, but is at the same time so far-reaching”. When asked how SAS embodies a West Virginia spirit, John replies, “Modern whiskey (sweet, caramel-colored, barreled) was invented by the Celts. They valued family, hard work, having a good time and hated authority. Sound like any other place you know?”

“At the end of the day, I hope that people see in our brand a bit of themselves. I want the high-quality and special nature of what we do to resonate with the drinker. And, because I’m the sales guy, I hope they buy as much as they can – LOL”